Christians persecuted in the U.S.? I use Google Alerts to keep a listen to current events. Each day, I'm sent a quick-digest of news.

Today, this came through, and it seemed ironic. 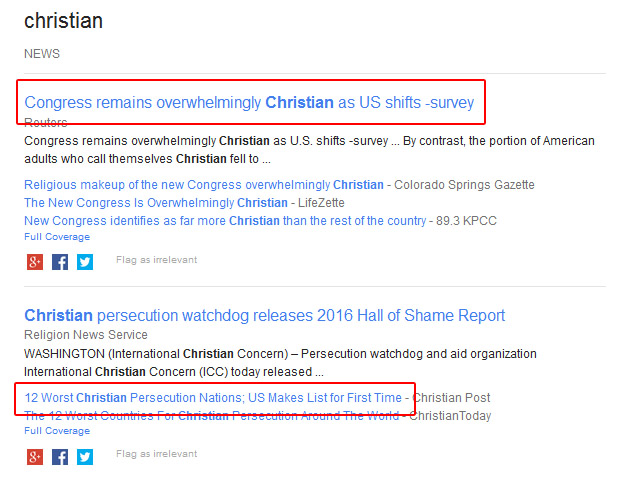 The highlighted parts are, emphasis mine:

I don't doubt that there's actual Christian persecution in the world... but Evangelical Christians are now in full control of all three branches of the US Government (or will, once they appoint a Mega-Scalia to the Supreme Court).

We live in a country where Christian expression is the norm, and places like Ken Ham's "Ark Park" can actually be built (using bonds/grants from the local residents!), and thrive.

So how, exactly, are they persecuted? The article is about a published "Hall of Shame" report, with top countries for Christian persecution.

This is what they they have to say about Pakistan.

That's horrible, obviously. However, Christians in America and other 1st world nations are busy discriminating against non-Christians, trying to pass pro-LGBTQ discrimination laws, blasphemy laws. They're constantly working to co-opt public schools to pressure/proselytize Christianity to all the students.

Secular efforts and activism is usually trying to prevent what this report is complaining about happening to them elsewhere. It's like a bully, who usually goes around punching people in the face, crying to mommy when someone hits him/her back.

At the bottom of the list, they start talking about the U.S.

In short, Christians in the US are facing constant attacks in the media, where they are portrayed as bigoted, racist, sexist, and closeminded.

I don't grant the "constant attacks" as Christianity is still portrayed as the norm. But, they've also earned this reputation. This is the "punching back" part... but not even that. It's the "being called-out on punching people", that's being bemoaned.

The characterization in the media may be translating into direct attacks as well.

"May be?" Is this report the "Top countries where Christian Persecution may be happening?"

The First Liberty Institute, the largest legal organization in the US dedicated exclusively to protecting religious freedom, documents such actions and reports that attacks on religion doubled between 2012 and 2015

No citations are given, so forgive me for not taking this biased source's word for it. Whenever we actually look into what these groups report, we find they're heavily distorted and misleading.

More importantly, Christians and all religious people are being marginalized through the law.

In virtually all the cases, we're talking about Christians doing things that it was morally and legally wrong for them to be doing in the first place. Then, we finally enforce the law, and they don't like that.

Yes, because Government agents cannot endorse, prefer, favorite, promote one religion over another, or religiosity over irreligiosity. Players who might not otherwise be religious, or have different beliefs, are suddenly placed in a position of peer pressure, to engage in activities that violate their conscious, otherwise face ostracization.

(for the scenario above)

... Ironically, all of Nicole's problems started when she began playing on the girls' basketball team. After the first game, the girls gathered to recite the Lord's Prayer, as they always do. However, Nicole did not participate. Nicole is an atheist, she does not believe in God. When she told her teammates their excitement for the California-transplanted freshman turned sour.

It is reprehensible for the taxpayer-funded public school to be placing students in the position of either violating their conscious and pretending to be a Christian, or putting themselves at social risk.

Christianity is not being "marginalized". They're now finally having to obey the same laws as everyone else.

If this was an Islamic prayer circle, this report would no longer be written in English. It'd be random rage-induced keyboard-mashing.

Christian business owners forced to pay a $135,000 fine for declining to bake a cake for a same-sex wedding

Yes, because again, Christians are not above the law. They have to follow the same non-discrimination laws as everyone else. From what I understand, the $135k was objectionally overkill, but they still broke the law, and should have faced some penalty.

In 2011, InterVarsity Christian Fellowship lost their official recognition as a student organization in all of their respective chapters across 23 California public colleges

Because... again... in order to have official recognition with the University/Colleges, you have to follow their rules... which include non-discrimination.

The ICF broke the rules (all official college groups must be open to everyone), and so therefore, was penalized.[ref]http://www.patheos.com/blogs/friendlyatheist/2015/06/20/california-state-university-give-stamp-of-approval-to-christian-groups-who-want-to-discriminate/[ref]

They finally lifted the ban, and everything was fine. This wasn't even a problem of the law. It was following the requirements, if an organization wanted to voluntarily have official recognition with the college.

In 2014, Eric Walsh was terminated one week after being hired by the Georgia Department of Public Health (DPH). The basis of termination was alleged undisclosed income from prior employment in California. However, the Georgia DPH knew that Walsh was a Christian preacher outside of work and went to great lengths to review and investigate the content of his sermons posted on YouTube.

So they can't actually dig up any actual persecution, so they go with more allegations instead?

I haven't found any objective reporting on this, that doesn't have an intense Christian slant to it. From what I can tell, the request for religious documents was in response to the lawsuit of Walsh against the DPH. The reason for that demand is unknown, thanks to any useful information being buried by page after page of Christian news sites screaming persecution.

If this actually happened (being fired for being religious), they're right - this is wrong. But for a report trying to make the case that the U.S. is in the top-12 list is most persecuted countries... at least use complete cases where we know the whole story.

The rise of these cases stems partly from a broad cultural shift towards secularism.

But yes, how dare we have a cultural shift for a more open, fair and neutral government that maximizes religious freedom for all?

Anti-Christian entities have been able to leverage the growing secularization of society and culture to their advantage, utilizing the courts as a preferred venue to gradually marginalize and silence Christians

Here's a hint - those who are filing lawsuits would not be winning (beyond occasional miscarriages of justice) if the law was not on their side.

No one is "silencing" Christians. They are free to say whatever they want.

The First Amendment explicitly grants freedom of religion, not freedom from religion. The essential aim is to protect the right of citizens to practice religion in the public square.

How do you exercise your freedom of religion when, every day your child goes to school, the Government is indoctrinating them into a competing religion? How is that freedom for either you, as the guardian, or your child? How does that work?

Also, this mention of "public" square is a classic point of confusion and false equivalency. "Public" means "Government" legally... it doesn't mean "anywhere that's not inside your house".

You are free to go outside, go up and down the streets, go into parks, and voice yourself all you want. What you cannot do, however, it co-opt the Government (such as public schools, courthouses, etc), to proselytize.

That's the way it should be. That's the only way to actually achieve the First Amendment.

This is neither "marginalization", "persecution" nor "discrimination" against you. This you having to play nicely with others, share society with people who are not like you, and most important of all, to discontinue abusing the power of Government to cram your religion down everyone elses' throats.

If that's "marginalization", what does that make the non-Christians in America?

It's easy to become frustrated with this. This report on the U.S. is utterly bursting at the seams with total bullshit. They seem to think "religious freedom" means "Christian-only domination of government",