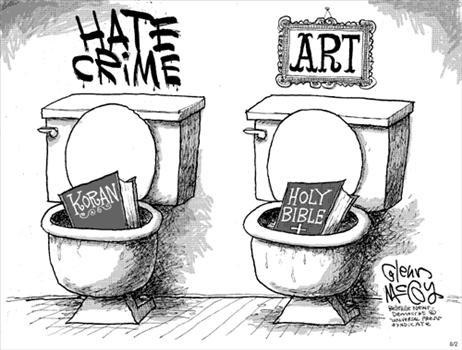 I'd say that I'm generally on "that side" of the social-political spectrum that the cartoon is indirectly criticizing. The problem is - as political discussions tend to go - it's not an accurate representation of my position. At least, the general attitude isn't represented.

It could be the author was commenting specifically on holy books in toilets, but I think it speaks to the general confusion we have between our sides.

It's about attacking people versus attacking ideas. There's a big difference between saying "Muslims are violent terrorists" and "Islam promotes violence". Many people can't seem to discern the difference.

There's also a difference between "I hate Muslims so I'm going to insult them by putting their book in a toilet" and "This is how much I disrespect the ideas of the Bible." Can you tell the difference in the cartoon above? There's a lot of missing context.

It's a fine line, but an important one.

It doesn't help that people have difficulty separating the two on a personal level. If there's a movie I really like, and someone disparages it, it can be personally insulting, because it's indirectly saying something about my personal tastes and preferences, even if it wasn't meant that way.

In the U.S.A. - where Christians have dominance and privilege, I can see how this cartoon (or an equivalent) may have been conceptualized.

In reality, there's two different things going on, and the writer isn't comprehending it.

That's why, within certain political groups among the atheists - who spend plenty of energy fighting the ideas of Islam - can look at other groups of atheists who are attacking the Muslim people, and call them bigoted - and be correct.